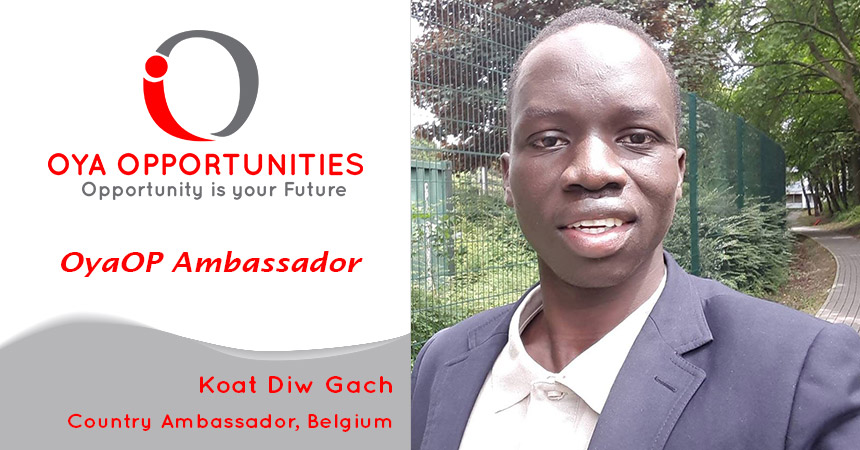 Koat Diw Gach was born in Nasir, South Sudan. Koat was born in the most difficult time when his country was at war and at the age of 10, he was displaced to Ethiopia together with his parents and lived as a refugee. He has been known for his skills in football and his social activities as a young boy. In the year 2010, he won DAFI (Albert Einstein German Academic Refugee Initiative Fund) scholarship funded by the Germany government to study his Bachelor's of Science in Geology and Mining in Arba Minch University, Ethiopia. Koat completed his studies with distinction.

In April 2016, he won the Erasmus Mundus, CARIBU scholarship funded by the European Commission to study at Vrije University Brussels (VUB) for a Master's in Management Science. Koat is an active political activist and as well as a community organizer. He is now writing his Master thesis on the "Contribution, Roles and Challenges of Non-governmental
Organization(NGOs), Case study: in South Sudan" and interning with the "South Sudan Women Advocacy and Empowerment(SSWAE)".

At VUB, he is a council member of the "VUB African Students' Community (ASCOM)" and the External Relation Secretary of "South Sudan Advocate for Peace, Justice, and Democracy (APJD)".

Koat has been awarded a Diploma in Anti-Corruption and has attended several leadership conferences and trainings. He was also awarded a Certificate in Human Right during the "World Festival Youth and Students" (WFYS) in Sochi, Russia.