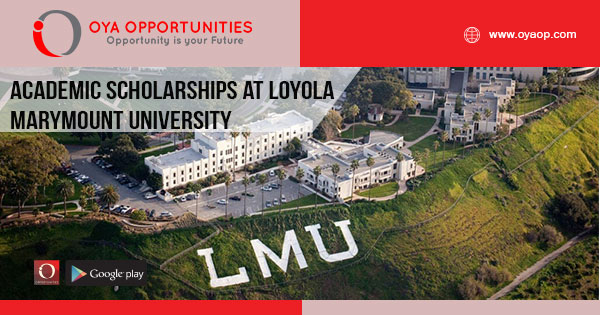 Loyola Marymount University offers a wide range of academic scholarships to recognize and reward the academic accomplishments of our most distinguished entering freshmen. No special application is required for these scholarships.

Named for Fr. Pedro Arrupe, the long-time Superior General of the Society of Jesus (the Jesuits) whose vision of Educating Men and Women for Others has become the hallmark of Jesuit education. Arrupe Scholarships are highly competitive and selective, range in value from $12,500 annually to full tuition, and are renewable for four years.

Also, international students who are considered for the Arrupe award compete with other students educated outside the USA in order to account for the variance in educational systems around the world. Furthermore, scholarship award amounts may vary from the award amounts for domestic students and there is not a specific minimum award value.

In recognition of the values and heritage, LMU shares with the Jesuit and Marymount secondary schools in the United States. One student from each of these high schools will be awarded the Jesuit or Marymount High School Scholarship annually.

This scholarship carries a value of $12,500 annually, and is renewable for four years, for a total value of $50,000. In addition to academic accomplishment, selection for this scholarship considers involvement in school and community activities, leadership and service.

This scholarship is awarded by LMU’s Jesuit community to graduates of Jesuit or other Catholic secondary schools whose contributions to their community through service and leadership warrant special recognition. Further, approximately 10 Jesuit Community Scholarships are awarded each year. Jesuit Community Scholarship winners receive $10,000 annually for four years, for a total of $40,000.

Recognizing students of substantial academic achievement, LMU Achievement Awards begin at $1,000. However, it is renewable annually for four years with a condition where academic accomplishment is above the minimum requirement.