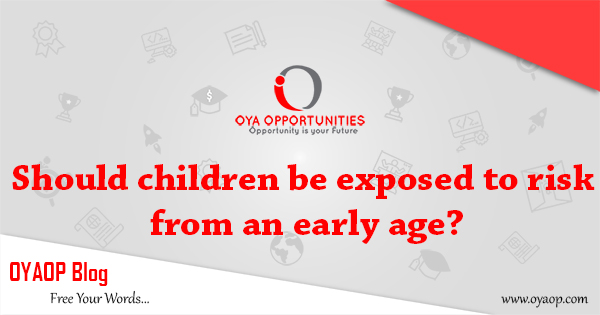 Should children be exposed to risk from an early age?

by
Nguyen Gia Khanh
on

Are you afraid of taking risks, even as a grown up? I believe that most of us would say “yes” and confess that all of us, at a lesser or greater degree, actually have a certain fear of coping with risks. This therefore raises a controversial question among people whether they should prepare the upcoming generations to face risks in their life from an early age.

In the first place, many people believe in the conventional type of education and would like to keep children away from something for which probability of good outcomes is insecure. They claim that children should not be exposed to risk as they are vulnerable and inexperienced, they could be hurt or even scared while dealing with risks. Furthermore, not all the children are capable of managing the risks that others let them cope with. For instance, when children choose to stand up for someone who is bullied at school or stick with their viewpoints in class despite the risk of being hurt, they may have to face consequences of it later which they might not be able to handle.

Children might come up with brilliant ideas of their own, but it is not really realistic or under their ability. In the second consideration, many others stand on an opposite view and argue that exposing children to risk from an early age can help them build up their own personalities, confidence and bring out the best of their potentials. For example, bravely expressing opinions even if it means going against the common beliefs and the crowd would have a great impact on identifying and contributing students’ own features in spite of the fact that this could probably trap them in some troubles.

Students who are aware about risks will grow up to be dynamic youngsters and dare to think take action in the future, then gradually will no longer be easily defeated by many other obstacles which would come in life. If children are not familiar with risk and its management, they might come up with brilliant ideas of their own but may lack the courage to turn it into reality.

From my own perspectives, I agree with the argument that kids are vulnerable, however, the children could stay vulnerable like that until they get much older if they are not exposed to coping with risks in the learning age. Consequently, when they have no choice but facing up with difficulties in real life with no preparation, they would be even more obsessed with the fear of failures.

It is true that children are young, reckless and not fully prepared. However, that could be considered to be a good point over adults. This advantage allows young people to look through the fear, ignore the reality that they can fail and run forward until they reach the end. In conclusion, letting children handle the risk choice definitely has many drawbacks. However, I believe it is one of the best ways to teach them important realistic lessons in life, encourage them to step out of their comfort zone and learn by trials and errors. Still educating children about risks is important in today’s time in one or the other way.