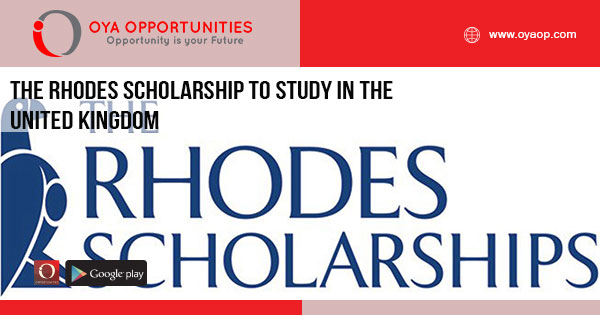 The Rhodes Scholarship to study in the United Kingdom

The Rhodes Scholarship is the oldest (first awarded in 1902) and perhaps most prestigious international scholarship program, enabling outstanding young people from around the world to study in the United Kingdom.

The Rhodes scholarship is one of the oldest, prestigious and biggest scholarships of the world. Following, it is serving back from 1902, making it the first large-scale program of international scholarship.

The English businessman and politician Cecil John Rhodes was the man who is behind the establishment of this scholarship. It is an opportunity for young people from around the world to study at the University of Oxford, United Kingdom.

Also Read: 10 Universities with the Best Classroom Experience in the USA

Provider of the Rhodes scholarship

Oxford awards recipient of the Rhodes scholarship with a giant and generous prize. Generally, the prize of Rhodes scholarships includes full-time tuition fee, health insurance, a living stipend and even the two flight tickets to arrive and depart the UK. In overall, the worth of scholarship in pounds is £15,141 in a year. In addition to that, it also covers funding and costs for attending conferences and researches.

Outstanding intellect, character, leadership, and commitment to service are the major four key factors that are considered while granting Rhodes scholarships. Furthermore, you must have enough English language skills as well as academic credits to enroll in graduate programs in the United Kingdom.

Also Read: Full Scholarships at the University of Oxford

Please visit the website of the Rhodes Scholarship for more information.