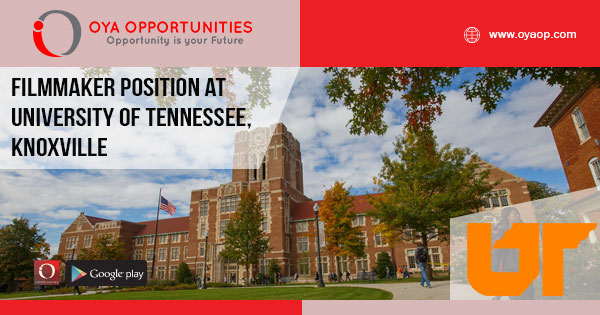 Academic Job
Country: USA
City: Knoxville
Save
Looks like you haven't logged in. Login to save opportunities.

About the University of Tennessee

The UT seeks a dynamic, energetic, and enthusiastic filmmaker to join the School of Art and Cinema Studies Program. The position holder must be a director, producer, editor, or other artists with creativity and strong knowledge of cinema.  In general,  the incumbent will teach production courses, including introductory digital cinema/video, editing, and/or advanced courses in one or more of the individual’s area(s) of expertise – including, but not limited to: non-fiction production, producing, editing/post-production, cinematography, episodic (web or television), etc.

Furthermore, he/she will be liable to participate in the departmental organization, student mentoring at the undergraduate and graduate levels, and committees that support the educational mission and initiatives of the Cinema Studies program, the School of Art and the University, including MFA thesis committees.

In order to be eligible for the role, candidates must have the following qualifications and competencies