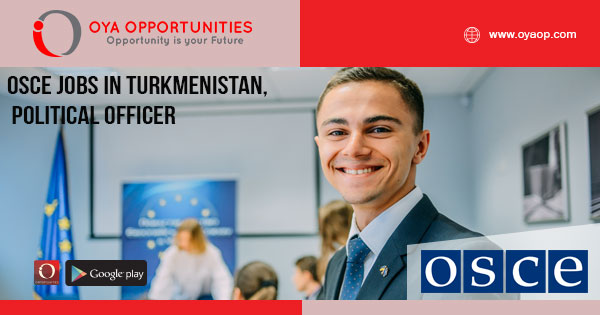 General Job
Country: Turkmenistan
City: Asgabat
Save
Looks like you haven't logged in. Login to save opportunities.

The Organization for Security and Co-operation in Europe (OSCE) is the world’s largest security-oriented intergovernmental organization. Its mandate includes issues such as arms control, promotion of human rights, freedom of the press, and fair elections. It employs around 3,460 people, mostly in its field operations but also in its secretariat in Vienna, Austria, and its institutions. It has its origins in the 1975 Conference on Security and Co-operation in Europe (CSCE) held in Helsinki, Finland. The OSCE is concerned with early warning, conflict prevention, crisis management, and post-conflict rehabilitation. Its 57 participating states are located in Europe, northern and central Asia, and North America.

In particular, the incumbent will perform the following functions under the general direction and supervision of the Head of the OSCE Centre in Ashgabat