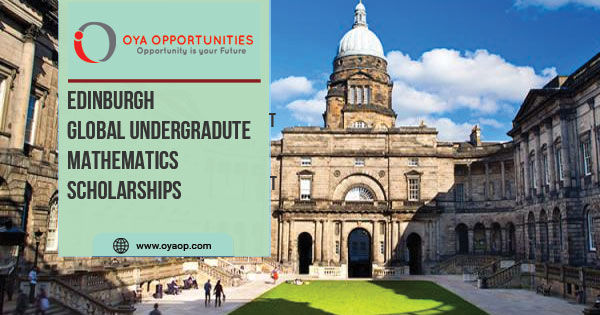 UK Colleges
Partially Funded
Country: Scotland
City: Edinburgh
Save
Looks like you haven't logged in. Login to save opportunities.

The University of Edinburgh grants Global Undergraduate Mathematics Scholarships for students with outstanding abilities, outside the European Union for the academic session 2020-2021

Eligibility For The Scholarship

The scholarships are tenable throughout the duration of the program study, subject to its academic progress. They are worth £5,000  per year.

About The University of  Edinburgh,

The University of Edinburgh is the sixth oldest university in the English-speaking world and one of Scotland’s ancient universities.  The 2020 QS World University Rankings has ranked it 20th in the world. Furthermore, it receives approximately 60,000 applications every year. That makes it the second most popular university in the UK by the volume of applications. In addition to that, the alumni of the University include some of the major figures of modern history, including 3 signatories of the American declaration of independence and 9 heads of state and government. Along with that, the alumni and faculty members include Nobel, Turing award laureates, Pulitzer prize winners and also Olympic medalists.