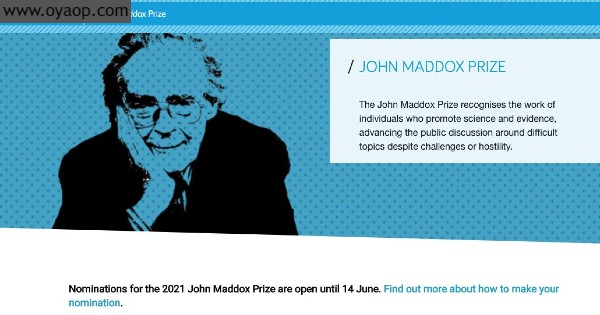 Nominations for the 2021 John Maddox Prize

Nominations call for the 2021 John Maddox Prize. The John Maddox prize is a joint initiative of the charity Sense about Science and the leading international scientific journal Nature. The Prize is for the researchers with great courage and integrity in standing up for science and scientific reasoning against fierce opposition and hostility. Each year there is one or two winners and an additional prize for an early career researcher.

The prize brings into the spotlight the difficulty faced by many who fight to share the results of research evidence and inspires and encourages people the world over to do the same. In 2019 there were over 200 nominations from 38 countries.

The John Maddox Prize recognises the work of an individual to promote sound science and evidence on a matter of public interest, facing difficulty or hostility in doing so. The prize advocates for the value of an open and honest environment for societies to discuss scientific evidence.

The John Maddox Prize is going to held at Wellcome Collection, London in November. Winners receive £3000 (winners in the public office usually waive this).

Nominations illustrate a wide variety of circumstances faced by researchers and communicators around the world, and judges consider these in the round. They also consider: