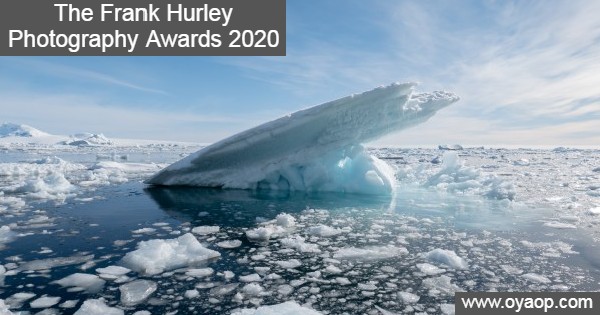 The Frank Hurley Photography Awards is an international competition to find the best in new photography honoring the spirit and adventurous career of this iconic Australian photographer.

The Frank Hurley Photography Awards is organized and presented by the Mawson’s Huts Foundation Ltd., a registered not for profit charity established in 1997 dedicated to conserving Australia’s most isolated heritage property, the original expedition huts of 1911-14 Australasian Antarctic Expedition (AAE). Situated at Cape Denison in East Antarctica, the buildings, now known as Mawson’s Huts were built by the expedition team and used as their main base for two years. Led by Dr Douglas Mawson (who was later knighted), the team included the 26-year old Frank Hurley as the official photographer, who operated from a tiny 1.2m2 darkroom within the main hut.

The Frank Hurley Photography Awards aims to celebrate that legacy and to seek out contemporary photographers who can harness the power of the camera in the way that Frank Hurley made unforgettable. In five categories, judged by a panel of highly qualified professionals, the competition will offer substantial prizes and for one overall winner, the trip of a photographic lifetime to Antarctica with Chimu Adventures.

Who has Frank Hurley?

Frank Hurley was a storyteller and an artist well ahead of his time. His career spanned the period from the Kodak Brownie and silent film to Kodachrome and Technicolour travelogues. His use of constructed images (that, is multiple images superimposed to create the dramatic effect) was seen as controversial, but it was an early sign of how determined Hurley would be to create emotion and drama, using photography as his toolbox.

The Frank Hurley Photo Awards is open to all in multiple themes.