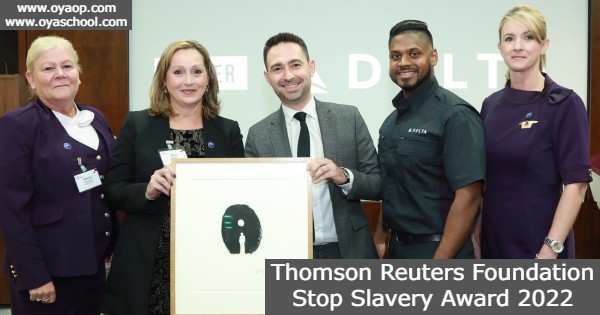 Thomson Reuters Foundation calls applications for Stop Slavery Award 2022.  In collaboration with Turner Prize-winning artist Anish Kapoor, and in consultation with leading actors in the anti-slavery space, the Thomson Reuters Foundation launched the Stop Slavery Award in 2015 to recognize companies who can be considered “best-in-class” based on the policies and the processes they have in place to limit the risk of slavery in their supply chain and operations, as well as the role they are playing as key agents in the global fight against slavery.

Stop Slavery Award aims to recognize the wide range of actors dedicated to ending the scourge of modern slavery and human trafficking.

In addition to that, the award categories recognize innovators in this space, impactful collaborations between sectors, grassroots organizations on the front lines, journalists raising awareness of this under-reported issue, as well as businesses of all sizes who are rooting out forced labor from their supply chains.

The Stop Slavery Award is a print conceived by Anish Kapoor especially for this initiative. The artist first became involved with Trust Women in 2014, now the annual Trust Conference, when he delivered a keynote speech on the important role art must play in raising public awareness of modern slavery.

Anish Kapoor spent two years conceptualising the Award through a number of striking designs that encapsulate the complexity of the issue.