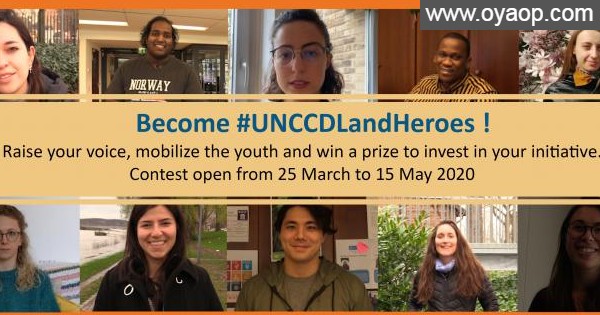 The United Nations Convention to Combat Desertification calls applicants to be Land Heroes 2020.

This year, Desertification and Drought Day focuses on changing public attitudes to the leading driver of desertification and land degradation: humanity’s relentless production and consumption. This year’s slogan is “Food. Feed. Fibre.”

A USD500 cash price will be awarded to one of participating UNCCD Land Heroes for an outstanding project with significant outreach capacity; to invest in the impactful and scalable action to be implemented by the end of 2021.

The winner will be selected by the UNCCD secretariat, and the project widely promoted on social media and shared with UNCCD Land Ambassadors for them to support through their channels. Furthermore, the winning project will also be showcased at UNCCD major events, such as Desertification and Drought Day global observance event.

The campaign “Become #UNCCDLandHeroes” appeals to the youth (15-30 years old) worldwide. Basically, it is a social media campaign “by the youth for the youth” that will trend under #UNCCDLandHeroes and #FoodFeedFibre. By entering the contest, the candidates will automatically be considered a UNCCD Land Hero. Due to the current COVID-19 situation, large gatherings are no longer permitted on the streets and in public spaces. But there is still a possibility, the will and power to create a large virtual crowd standing for land.

Basically, participants can submit a short text with a photo or video where they propose a specific solution; to limit the footprint that the production and consumption of food, feed, and fiber left on the land.

If candidates submit a video

If candidates submit a photo