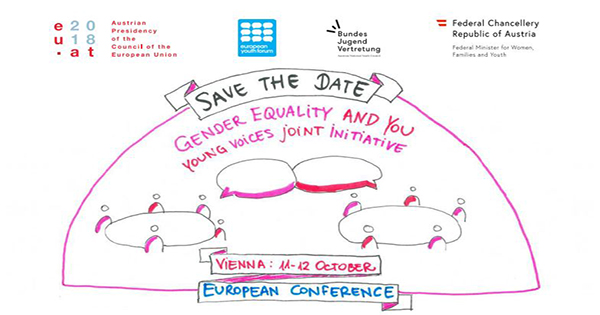 Funded “Gender Equality and You” Conference 2018 in Vienna, Austria

Conferences
Fully Funded
Country: Austria
City: Vienna
Oct 11 - Oct 12, 2018
Save
Looks like you haven't logged in. Login to save opportunities.

Apply for funds to participate in the conference “Gender Equality and YOU. Young Voices. Joint Initiative” that will take place in Vienna in the autumn. The Conference ‘Gender Equality and YOU’ aims at inspiring a positive, open and future-oriented dialogue about gender equality. Hosted by the Austrian Presidency of the Council of the European Union together with the Austrian National Youth Council and the European Youth Forum, the conference will offer a space to young people and youth representatives to meet and discuss the future of gender equality with ministers and political representatives as well as experts from NGOs, public administration, international and EU bodies.

The conference will focus on

Travel and accommodation costs for up to two young people per EU Member State will be funded by the Austrian Presidency and the European Commission.