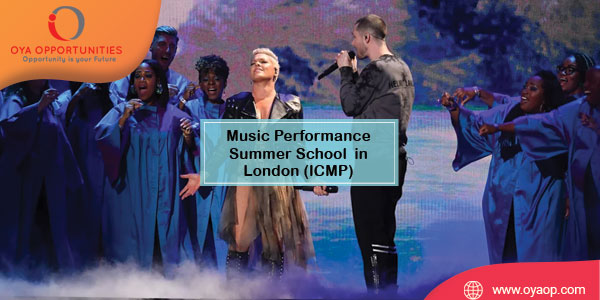 Exchange Programs
Country: UK
City: London
Jul 20 - Jul 24, 2020
Save
Looks like you haven't logged in. Login to save opportunities.

The Institute of Contemporary Music Performance invites emerging musicians and music performers from all over the world to participate in 5 days Music Performance Summer School in London, United Kingdom. This Music Production Summer School 2020 is the platform for individuals to boost their skills, not only as an artist but as an all-round performer. The participants will have an opportunity to understand and learn about the timing when playing with a group, improve technical patterns specific to the instrument – all within multiple genres, ranging from funk and soul to blues and rock.

The program includes both solo and group workshops to the participants. Both solo and group workshops will strengthen their abilities in the practice room and on stage. In addition to that, it will teach participants a technical shorthand that’ll help move them to move performance up a gear. These workshops will crescendo in a live showcase at the end of the week, which is the platform for candidates to test-drive their new ideas and skills alongside their band.

At the end of the summer school, the participant will

The fee of the ICMP Music Performance Summer Scool in London is £299. This fee includes student materials pack and course tuition.

The ICMP (Institute of Contemporary Music Performance) is a music institute in London, United United Kingdom. It has been developing and delivering music education and training to students of contemporary music for over 30 years; which longer than any other UK school. Average 94% of ICMP graduates are in employment or further education within 6 months of graduating from the institute. In 2017, the graduates of ICMP were earning an average salary of £24,000 six months after graduating, which is £5,000 higher than students from any other music institution in the United Kingdom.