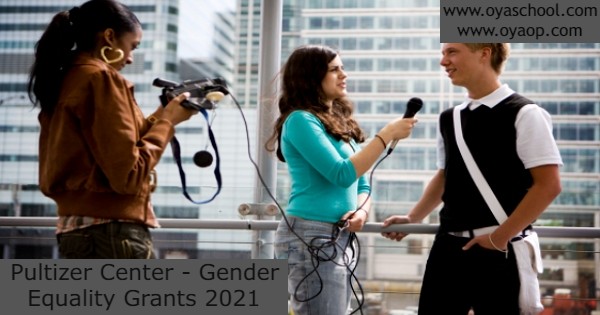 Apply for Pulitzer Center – Gender Equality Grants. The Pulitzer Center on Crisis Reporting, a non-profit organization that supports independent global journalism, is seeking applications for investigative data-driven projects on issues related to gender equality and the empowerment of women & girls. This opportunity is open to all newsrooms and independent journalists in the United States and abroad.

Women and girls are disproportionately affected by global crises and face discrimation and violence worldwide. In the fight against the disparities they endure, they show resilience, strength, and leadership.

Pulitzer Center – Gender Equality Grants is designed to help journalists take to a new level the reporting on issues related to gender equality and the empowerment of women and girls. It values stories that elevate the voices of communities not often represented in the media, stories of resilience, and projects that tackle systemic issues of gender equality using data and investigative reporting. For inspiration, here are a few recent projects it have supported:

Basically, there is not budget range but Pulitzer Center will consider projects of any scope and size and they are open to supporting multiple projects each year. The average size of a Pulitzer Center grant is $5,000, but may be more or less depending on circumstances.

The Pulitzer Center expects news organizations to pay freelance journalists for their work, though in exceptional cases, they may consider stipends to cover a reporter’s time, if provided in the budget with an explanation. It is OK to include costs of contractors, such as data researchers, illustrators, or data visualization/story designers in the proposal and budget.

Apply for a Grant