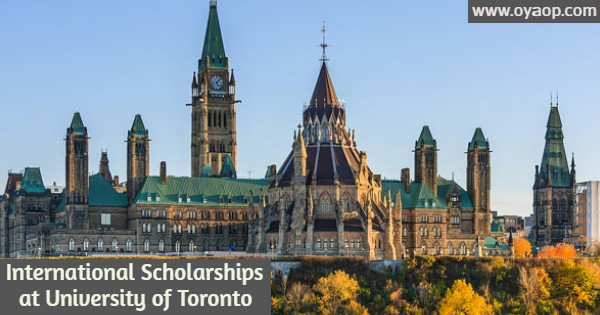 Applications call for the Lester B. Pearson International Scholarships at the University of Toronto.

The Lester B. Pearson International Scholarships at the University of Toronto is an opportunity for outstanding international students to study at one of the world’s best universities in one of the world’s most multicultural cities. The scholarship program aims to recognize students who demonstrate exceptional academic achievement and creativity and who are recognized as leaders within their school. Awarded annually, these scholarships recognize outstanding students from around the world, including international students studying at Canadian high schools.

The Lester B. Pearson International Scholarships will cover tuition, books, incidental fees, and full residence support for four years. The scholarship is tenable only at the University of Toronto for first-entry, undergraduate programs. Each year approximately 37 students will be named Lester B. Pearson Scholars.

To be eligible to apply to the Pearson International Scholarships, you must be

To become a Pearson Scholar, you must be nominated by your school and apply to undergraduate studies at the University of Toronto. Pearson Scholars are students who have demonstrated exceptional academic achievement and creativity, who are accepted as leaders within their school, and who have the potential to contribute to the global community in the future. They can be distinguished from other students who may have equally high academic results by virtue of their breadth of interest, intellectual energy, and impact on the life of their school and community.

The University of Toronto

The University of Toronto (U of T or UToronto) is a public research university in Toronto, Ontario, Canada, located on the grounds that surround Queen’s Park. It was founded by royal charter in 1827 as King’s College, the first institution of higher learning in the colony of Upper Canada. Originally controlled by the Church of England, the university assumed its present name in 1850 upon becoming a secular institution. As a collegiate university, it comprises eleven colleges each with substantial autonomy on financial and institutional affairs and significant differences in character and history.