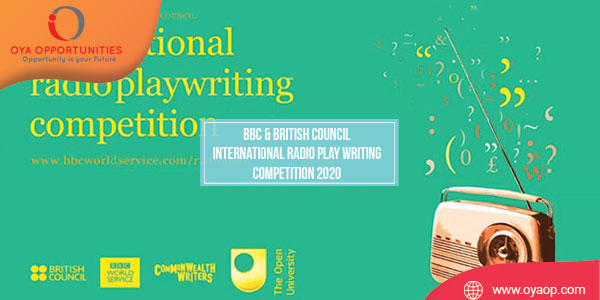 Competitions and Awards, Conferences
Country: UK
Save
Looks like you haven't logged in. Login to save opportunities.

Further, the International Radio Playwriting Competition, hosted by BBC World Service and the British Council, offers the unique opportunity for playwrights to have their radio play heard across the world by the BBC World Service’s millions of listeners.

Whether you’re an established or a completely new writer, the competition welcomes scripts from anyone outside of the UK. The radio dramas can be on any subject you like, as long as they are 53 minutes long.

What is the prize?

Who is eligible to apply for International Radio Play Writing Competition

Entrants should write a radio play of approximately 53 minutes’ length on any subject of their choice. The play must be substantially or entirely in English. Your script should be accompanied by a short synopsis, of no more than 400 words, which outlines the complete story of the play. You can apply by the following methods:

In order for your entry to be accepted, it must be accompanied by a completed copy of the entry form which can be downloaded here.