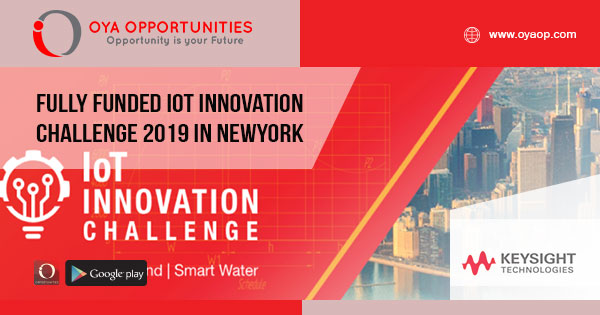 Competitions and Awards
Fully Funded
Country: USA
City: New York
Sep 21 - Sep 22, 2019
Save
Looks like you haven't logged in. Login to save opportunities.

Registration for the IoT Innovation Challenge is now open and entries are being accepted. Apply to Be one of the first 80 people in each of the competition regions to successfully register and submit a qualified entry. Further, Win a handheld digital multimeter. Further, undergraduate students can apply individually or in a group.

Furthermore, When classmates or colleagues work together, they can change the world. Keysight established engineering resources to turn the engineer into a successful venture. Moreover, The Keysight IoT Innovation Challenge is a design competition that challenges students to make the world better for billions by innovating low-power IoT (Internet of Things). Students compete via online written and video submissions to win an all-expenses-paid trip to the final competition at the World Maker Faire in New York. Six teams (2 people per team) will advance to the final, where they will demonstrate their design ideas live on stage before a panel of judges.