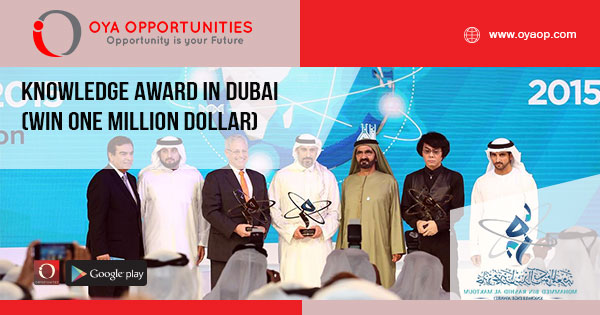 Competitions and Awards
Country: UAE
City: World Trade Center, Dubai
Save
Looks like you haven't logged in. Login to save opportunities.

In late 2015, His Highness Sheikh Mohammed bin Rashid Al Maktoum, Vice President and Prime Minister of the UAE and Ruler of Dubai, issued a Decree establishing the Mohammed bin Rashid Al Maktoum Knowledge Award to encourage those working in knowledge-related fields to innovate and create new ways to spread knowledge around the world. It reflects Dubai’s – and it’s Ruler’s – resolve to honor knowledge-related advancements anywhere in the world. Further, all the while encouraging innovation and originality.

Moreover, In 2016 HH Sheikh Mohammed issued a Decision forming the Award’s Board of Trustees of the under the chairmanship of His Highness. Further,  Members of the Board include Jamal bin Huwaireb, Vice Chairman of the Board and Secretary -General, and representatives of United Arab Emirates University, Cairo University, Nanyang Technological University, Oxford University, and National Geographic. Additionally, the Award succeeded in attracting international attention to the Knowledge Summit, an unprecedented type of event in the region.

Any organization or individual may, regardless of gender, nationality, race or religion or other personal factors, nominate a candidate, to win MBRKA, according to the following conditions: