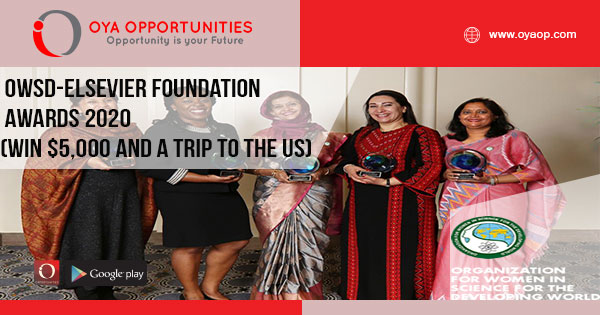 The call for submission of applications is now opened for the OWSD-Elsevier Foundation Awards. Further,  for Early-Career Women Scientists in the Developing World, a high-profile award that honors the scientific and career achievements of women from developing countries. Applications for the 2020 OWSD-Elsevier Foundation Awards will be until 29 August 2019 for early-career women who have made significant contributions in the fields of Engineering and Technology. Further, Evidence of innovation will be considered favorably.

The 5 awards will be as follows: one for each of the four regions of the developing world, Further, an additional ¨floating” award for an outstanding candidate from any of these regions.

In addition, the applicant must have lived and worked in one of the following science and technology lagging countries for at least 5 of the last 15 years: