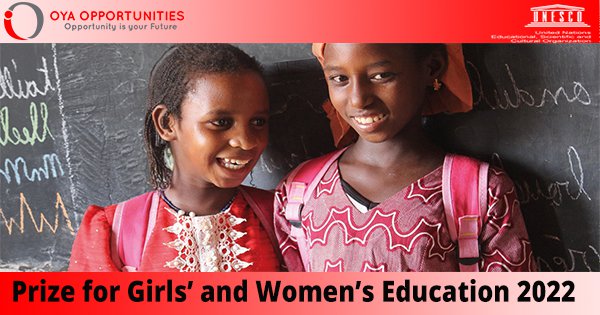 The UNESCO Prize for Girls’ and Women’s Education honors outstanding and innovative contributions made by individuals, institutions, as well as organizations to advance girls’ and women’s education. It is the first UNESCO Prize of this nature and is unique in showcasing successful projects that improve and promote the educational prospects of girls and women and in turn, the quality of their lives.

The Prize has two laureates and consists of an award of US $50,000 each to help further their work in the area of girls’ and women’s education.

Governments of UNESCO Member States via their Permanent Delegations to UNESCO and Non-Governmental Organizations (NGOs) in official partnership with UNESCO can make up to 3 nominations. Moreover, self-nominations are not eligible.

Who can be nominated?

Individuals, institutions, as well as organizations advancing girls’ and women’s education are eligible for nomination. Nominations must focus on an established project or program of the candidate, which has been running for at least two years and also meets the selection criteria.

How to be nominated?

If you, your institution, or organization meet the selection criteria, please contact your country’s National Commission to UNESCO or a relevant NGO in official partnership with UNESCO.

Once it has passed the basic eligibility requirements, the project/program of the candidate will be assessed by the Jury based on the following three criteria: