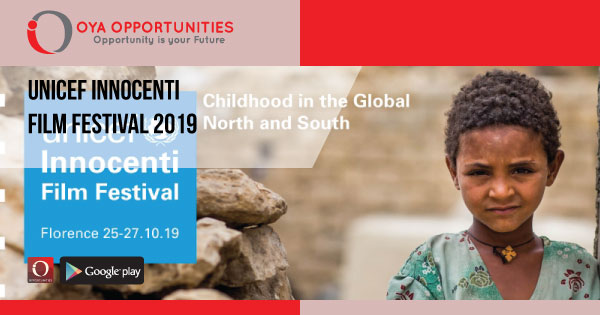 Competitions and Awards
Country: Italy
City: Florence
Save
Looks like you haven't logged in. Login to save opportunities.

The aim of the UNICEF Innocenti Film Festival is to showcase the best world film and video on childhood. Entries included in the festival will promote deep reflection on narratives of childhood and the experiences that shape them; in the child’s individual life, in the family, the community, in institutions and societies of both the Global South and North.

Children’s rights are timeless, but the circumstances of childhood have changed dramatically since the Convention on the Rights of the Child (CRC) was signed in 1989. Together with global participation, UNICEF has made great strides in the protection of Child Rights. Despite the success, new complex new threats have also emerged. Far fewer children succumb to illness and malnutrition than ever before; yet, violence, the rise of technology, displacement and climate change introduce complex new threats unpredicted three decades ago. The CRC remains a vital global reference point to which all nations turn.

As these changes occur, the role of media – in all its dynamic forms – as well as the deepening engagement of children and young people in media production and use, have an impact on children’s lives in ways that are both profound and yet only dimly visible. The UNICEF Film Festival will take stock of these dynamic forces shaping childhood, spark discussion on the state of children and promote deep reflection on the experiences of children in different contexts.

Who is eligible for UNICEF Innocenti Film Festival 2019?

Films to be included in the UNICEF Innocenti Film Festival must be explicitly centered on a child or adolescent characters. Further, the entrants may submit the film into two categories.

Further, the filmmakers at UNICEF Film Festival must abide by the following rules:

How to participate in the UNICEF Innocenti Film Festival 2019

Entrants may make a submission for the UNICEF Innocenti Film Festival 2019 via the online platform. To submit their entries, the participants must register for the Film Festival, and upload their movie.

Further, the applicants can also register manually via email. The candidates will require to complete the application form and send it via email along with their movie before the deadline.