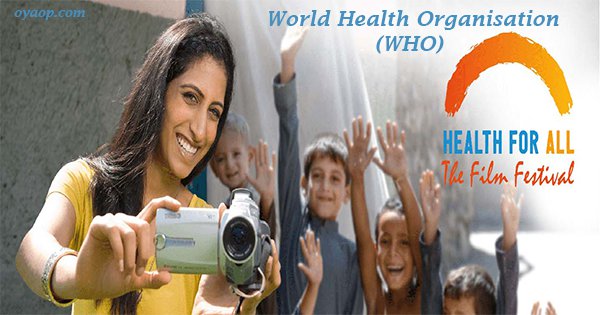 WHO: The Health for All Film Festival

The WHO Health for All Film Festival invites independent filmmakers, production companies, public institutions, NGOs, communities, students, and film schools from around the world to submit their original short films on health. The festival aims to recruit a new generation of film and video innovators to champion and promote global health issues.

To submit a short film, you need to choose one category among the three described below:

For each category, candidates can submit short documentaries, fiction films or animation films of three to eight minutes in length.

Additionally, WHO distributes some special prizes to short-listed videos not receiving a GRAND PRIX.

Eligibility criteria For the Film Festival

Technical Requirements for the Film Festival

The jury includes external advisers from the arts as well as WHO technical experts. The jury will watch a maximum of 15 selected videos for each category.

Each prize will be a trophy and a grant as follows:

The jury will announce the finalist in March 2022. During this announcement WHO screens the winning video online for public viewing, likely in the spring and/or early summer. Winners will get the information about it confidentially in April or early May, before a public announcement.