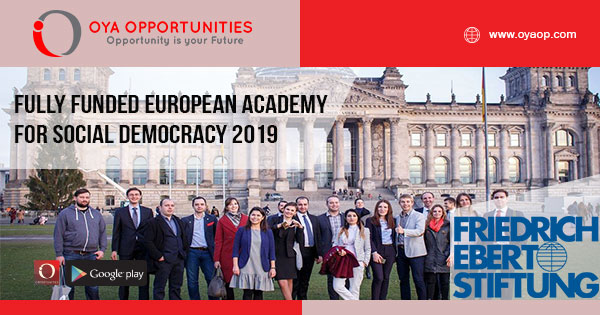 Conferences
Fully Funded
Country: Germany
City: Berlin
Sep 22 - Sep 28, 2019
Save
Looks like you haven't logged in. Login to save opportunities.

The Regional Office “Dialogue Eastern Europe” of the Friedrich-Ebert-Stiftung invites young progressive leaders. Who are of age 25-35 to apply for the 8th edition of the Eastern European Academy for Social Democracy. Further, which will take place from 22nd until the 28th of September 2019 in Germany (Berlin and surroundings).

Moreover, The 8th Academy will focus on the issue of gender and equality in the Eastern Partnership Region and Russia. A gender-based approach has become of critical importance in policymaking and the economy in the post-Soviet space. However, the extent to which gender policies have been put on the political agenda varies within the EaP region tremendously. While some countries try to adopt laws and regulations to enhance equal rights, in other states “gender” has turned into a contested term, which allegedly threatens the political and traditional values. The organizers strive to promote a debate about the opportunities. Also,  challenges of equal rights based politics with a strong focus on political and economic participation. Furthermore, the seminar is to include a discussion of the core elements of a proper social and family policy.

Goals of the European Academy program: