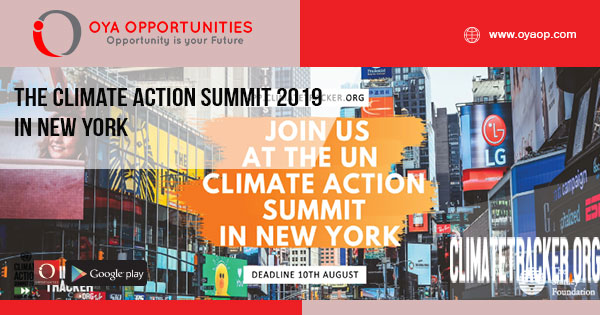 Conferences
Partially Funded
Country: USA
City: New York
Save
Looks like you haven't logged in. Login to save opportunities.

Climate Tracker is looking for young journalists from around the world. Those who want to make a big impact in their countries by publishing about a youth movement. Also, young leader pushing for climate action in their country.

Moreover, as of today, the plans presented by countries are not enough to keep global warming within the Paris Agreement’s 1.5C degree limit. That is why UN Secretary-General António Guterres is calling for a special summit in New York. The Climate Action Summit, which will convene and urge global leaders to set forth concrete plans. Further,  that raise ambition on climate action. Just a couple days before this, young leaders from all over will gather at the first-ever Youth Climate Summit to showcase climate solutions and engage with decision-makers on the defining issue of our time.

That is why Climate Tracker is asking you to publish a story about young people who are making climate action a reality.