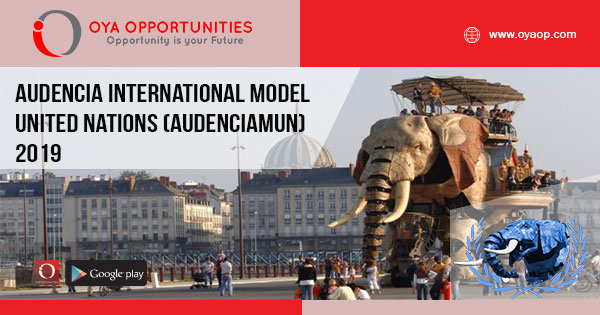 Model United Nations
Self Funded
Country: France
City: Nantes
Oct 17 - Oct 19, 2019
Save
Looks like you haven't logged in. Login to save opportunities.

Applications are now open for the Audencia International Model United Nations. The second edition of Audencia MUN is once again organized by members of Isegoria. One of the many student associations of Audencia Business School. Since its creation in 1994, it has taken a great place in our school’s life by organizing prestigious events. Further,  such as conferences with personalities from the political, economic and academic world, and an eloquence contest. Isegoria, from the ancient greek word ἰσηγορία, means equality of speech. Also, This principle guides the activities of the 30 students who put their skills and talents to the success of our events.

Moreover, they believe that MUNs are unique human experiences in which they combine our knowledge, listening skills and ability to synthesize to offer a coherent solution to a crisis topic through regulated speaking, based on the model of the United Nations debates. Also, the first edition of Audencia MUN, which took place on the campus of Audencia Business School in Nantes from the 2nd to the 4th of November 2018. Further, Aiming at having an international dimension for it mainly students from universities outside of France. They are convinced that the specificity of MUNs is to gather students from different cultures to confront and build ideas together.

AudenciaMUN also welcomes Audencia’s international students wishing to participate in the debates, as well as French students from various backgrounds. They thought it would be interesting and enlightening to talk about one of the main issues of our time, inequalities, all the while bringing it a quite unusual approach. Indeed, they thought an efficient way to understand inequalities and to fight them would be to observe them through uncommon angles like access to vaccination, chemical weapons, gender pay gap, protection of LGBT workers, technology, corruption, etc.