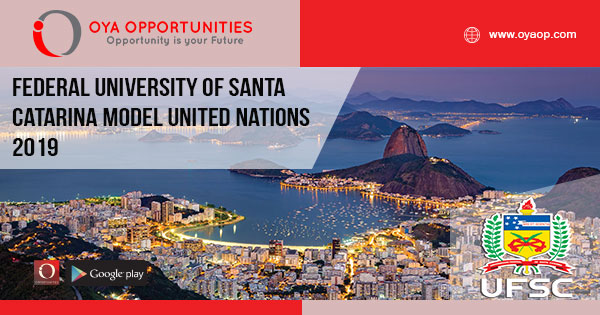 Model United Nations
Self Funded
Country: Brazil
City: Florianopolis
Oct 04 - Oct 06, 2019
Save
Looks like you haven't logged in. Login to save opportunities.

Registrations for the Federal University of Santa Catarina Model United Nations (UFSCMUN) are open. The event will be held on 15 and 16 September and will promote discussions in committees such as the Humanitarian Crisis in the Democratic Republic of Congo, the Discrimination and Violation of LGBT + Rights in Africa and the Southern Common Market Cooperation Agreement ( Mercosur) and European Union, as well as a Press Committee.

Moreover, Organized by the UFSC International Relations course, the event simulates meetings of International Organizations and Government Delegations. Further, Originally from Harvard University, United States, in 1927, as an initiative of a group that decided to simulate the League of Nations environment after the First World War. Today, there are over 400 MUNs and also, more than three thousand Brazilian students involved in the events.

Additionally, UFSCMUN (Federal University of Santa Catarina Model United Nations), founded in 2015, seeks to promote simulations of International Organizations and Governmental Committees for higher education students from all over the country. Likewise,  The intention is to bring together students interested in discussing issues that have impacted the history of the formation of the current paradigm of international relations, as well as current issues of great relevance. Further, the project will take place between October 4th, 5th, and 6th!