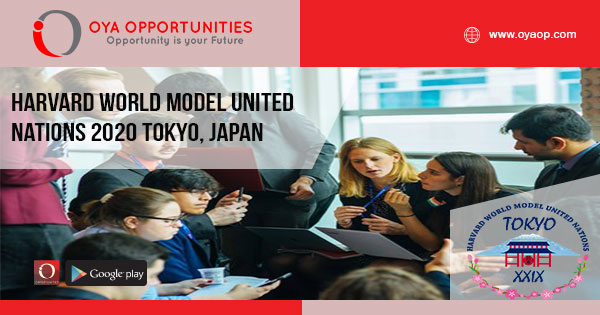 Model United Nations
Country: Japan
City: Tokyo
Mar 16 - Mar 20, 2020
Save
Looks like you haven't logged in. Login to save opportunities.

Through lively and informed debate, exciting social events, and a unique conference spirit, the WorldMUN experience reaches across cultures. Further,  borders to inspire both cooperation and friendship. Further, From the architecture that retraces its fascinating history to the technology that places it among the most creative cities of the world. Tokyo is ultimately endowed with a unique blend of tradition and innovation which makes it the perfect fit for a conference such as WorldMUN. Further, which both strives to celebrate and share the heritage and culture of delegates.  From all around the world, as well as bring them together to design innovative solutions to the most pressing problems of our future.

Finally, the international importance which Tokyo carries is a reflection of its cherished commitment. To multiculturalism, international cooperation, and cultural exchange. They could not be more excited to reaffirm this commitment once more by offering our delegates the opportunity to travel to such a magical city.

The goal of each committee is around the passage of legislation in the form of a resolution. Further, by the end of the conference, one that achieves consensus among nations with diverse points of view.  Also, builds upon the expertise and creative input of WorldMUN’s delegates.

At WorldMUN, committees are divided into three organs, each with a different character: