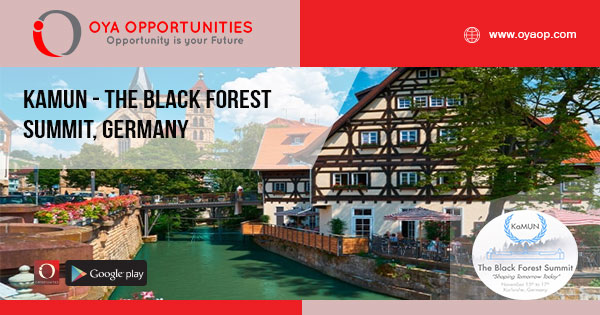 Model United Nations
Self Funded
Country: Germany
City: Karlsruhe
Nov 15 - Nov 17, 2019
Save
Looks like you haven't logged in. Login to save opportunities.

For the tenth time, the Model United Nations Initiative Karlsruhe (MUNIKA) is inviting students from across the globe. To what has become the largest MUN conference in south-west Germany: KaMUN – The Black Forest Summit 2019. Model United Nations is an incredible way to unite internationally-minded, young individuals. Further,  with the broadest range of backgrounds in terms of their studies, the place they call home, visions, and cultures. The fruits of bringing these future leaders together are more than just the sum of their individual strengths.

Moreover, you will represent one country in one of their four United Nations committees to work out based on consensus or majority vote. The United Nations General Assembly First Committee is often referred to as Disarmament and International Security Committee or DISEC. In times where even developing countries entertain space programs while at the same time. Further,  the failing INF treaty serves as a witness for failure in disarmament talks, a discussion on Arming or preventing the very same of outer space offers room for progress.

The highest body in the United Nations framework is the Security Council. At KaMUN – The Black Forest Summit 2019 They will have two delegates represent one country together, so-called double delegate. As the United Kingdom of Great Britain and Northern Ireland will have the presidency in the Security Council in November, it will be done accordingly at this conference. Further, The topic ahead aims at improving the situation in Yemen, a conflict often overlooked in world politics.