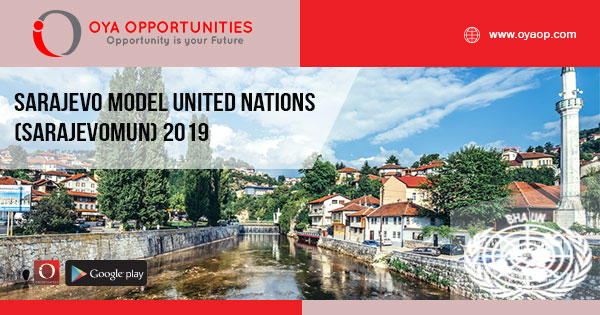 Model United Nations
Self Funded
Country: Bosnia - Herzegovina
City: Sarajevo
Sep 26 - Sep 29, 2019
Save
Looks like you haven't logged in. Login to save opportunities.

Applications are now open to participate in the Sarajevo Model United Nations. Sarajevo Model UN represents an academic simulation of various multilateral bodies and agencies such as the United Nations Security Council, European Council. The first edition of the Sarajevo Model UN was held in 2016, in partnership with the United Nations in BiH. The first conference attracted over 80 participants from more than 15 countries and coming from 3 continents of the globe. Aside from academic simulations of four multilateral councils (UNSC, WHO, EC, and GCC) in which participants role play diplomats in multilateral organizations. Eventually, their participants had an opportunity to engage in round tables with prominent members of academia. Representatives of the UN in BiH and also members of the diplomatic corps to Bosnia and Herzegovina.

Further, they hosted dozen of participants, coming from more than 4 continents of the globe. Over the course of the past four years, Sarajevo Model UN has evolved into one of the largest conferences in the Western Balkans, with a strong focus on the academic and personal development of its participants.

The following committees/councils will be simulated:

In partnership with various relevant institutions, private sector, also hotel Hills, we are looking forward to hosting 100 future diplomats and Agents for Change.

Why Participate in this Conference?

Because you will have a unique opportunity to interact with other Agents for Change from all over the globe, learn from leading experts, research on the most pressing prevalent issues of the contemporary global affairs, develop soft skills, negotiate in simulations — and also, most importantly, have fun!