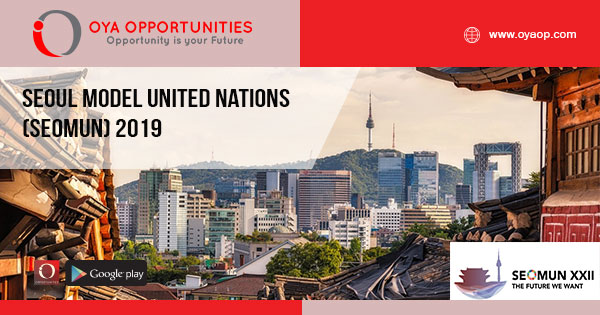 Model United Nations
Self Funded
Country: Korea
City: Seoul
Nov 08 - Nov 10, 2019
Save
Looks like you haven't logged in. Login to save opportunities.

Applications are now open for the Seoul Model United Nations (SEOMUN) 2019. SEOMUN XXII will take place from Friday, November 8 until Sunday, November 10, 2019, at Seoul Foreign School, located in the Seodaemun district of Seoul. SEOMUN has proudly served as a platform for debate and also,  discussion. Also, every November, the conference has been bringing in delegates from all across the globe to the heart of Korea. Further, they are proud to foster unique perspectives, which is essential to successfully tackling the world’s problems.

Moreover, SEOMUN has been a leading Model United Nations conference in East Asia for the past two decades, providing a platform of meaningful dialogue for thousands of students around the world. Likewise, this year, they hope that you could join us in the exploration of The Future We Want, a declaration on sustainable development and a green economy adopted at the UN Conference on Sustainable Development in Rio on June 19, 2012. they are excited to address the challenges of the world to the forefront of the discussion for progress.

The theme for this year is “The Future We Want”
“The Future We Want” is representative of the unwavering determination to leave future generations with a greener environment, a surplus of natural resources, and also, an empowered population. In reference to the Rio +20 United Nations Conference on Sustainable Development outcome document and the UN General Assembly’s resolution 66/288 — also entitled “The Future We Want” — the theme for the 22nd Annual Seoul Model United Nations conference is aimed encourage all SEOMUN XXII participants to think critically about what initiatives need to be taken in the status quo.

Below is a list of forums at SEOMUN XXII.