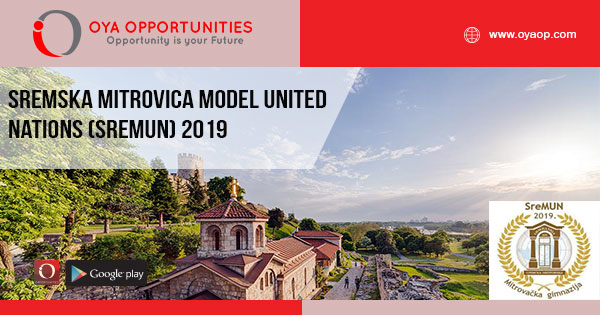 Model United Nations
Self Funded
Country: Serbia
City: Sremska Mitrovica
Nov 08 - Nov 11, 2019
Save
Looks like you haven't logged in. Login to save opportunities.

Applications are now open for the Sremska Mitrovica Model United Nations (SreMUN) 2019. The conference will take place in the secondary school, Mitrovačka Gimnazija, in Sremska Mitrovica, Serbia. It will be from Friday, 8th November to Monday, 11th November.

Although this is the first Model United Nations conference the team will organize. They are going to do everything they can to make Sremska Mitrovica Model United Nations (SreMUN) an unforgettable experience. Further,  for all the participants. The team consists of capable and hard-working students with MUN experience. Also, they are sure that together they can create a successful conference and, most importantly, make lifelong bonds and friendships under their main theme: “Diversity. Equality. Unity.”.

Further, theu invite you to take part in the debates and present your respective country and figure out creative solutions for some of today’s greatest issues. They assure you will enjoy your time at SreMUN in Sremska Mitrovica and are looking forward to meeting you all in November.

Moreover, The region of Srem in northern Serbia is situate on the slopes of Fruška Gora, a small mountain. Which is for its exquisite scenery, numerous monasteries, and a national park. In this region, the town of Sremska Mitrovica is on the northern side of River Sava – the bord between Central Europe and the Balkan peninsula. Once a capital of the Roman Empire during Tetrarchy, the town refer to as the ’glorious mother of cities’. Remains from that period, such as the Imperial Palace with its impressive mosaics, can be seen even today. Mitrovačka gimnazija is a secondary school in Sremska Mitrovica, offering four different programmes. Further,  depending on orientation: scientific, social, IT and general studies. Bilingual education is also available for students who want to take their lessons in the English language.