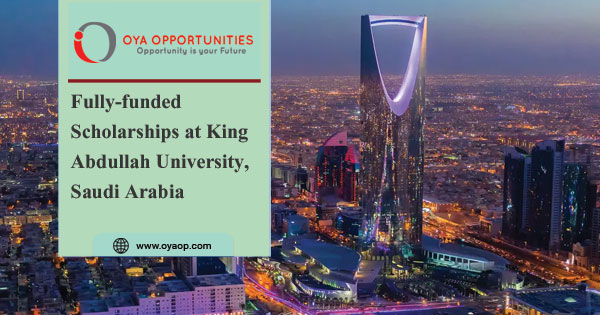 Scholarships and Fellowships
Fully Funded
Country: Saudi Arabia
City: Thuwal
Save
Looks like you haven't logged in. Login to save opportunities.

Candidates must have a minimum TOEFL score of 79 on the IBT (Internet Based Test) or 6.0 on the IELTS (International English Language Testing System). However, TOEFL or IELTS is not mandatory for candidates with previous academic degrees from accredited institutions United States, Canada, the United Kingdom, Ireland, Australia, or New Zealand. The King Abdullah University of Science and Technology does not require the GRE exam for admission. However, the university strongly encourages students to take the GRE general test as a high quantitative score on the GRE will enhance a student’s application. The KAUST admissions code is 4139.

Candidates must submit a xerox copy of all official, complete university Transcript/ Mark sheets/ Graduation Certificate/ Academic Record from all levels of their previous study. Documents must be in English (must be translated by certified language translator in case if they are in the native language. Also, the transcripts must contain the marks and grading that the students have accomplished.

In addition to that, applicants must also send three letters of recommendation written by professors or advisors from their previous field of study and their CV. Furthermore, after the approval of the admission of the candidate to study in the King Abdullah University of Science and Technolgy, candidates must send all the official transcripts to the admission office of KAUST

The King Abdullah University of Science and Technology (KAUST) is a private research university located in Thuwal, Saudi Arabia. Moreover, the university provides research and graduate training programs in English as the official language of instruction was among the 500 fastest growing research and citation records in the world in the year 2013. Overall, KAUST is the first mixed-gender university campus in Saudi Arabia. In the 2016 Nature Index Rising Stars, the university was 19th in the world of the fastest rising universities for high-quality research output. In 2019 the fractional count (FC) ranks KAUST as the 8th fastest-rising young universities (aged 50 and under) for their research output since 2015.