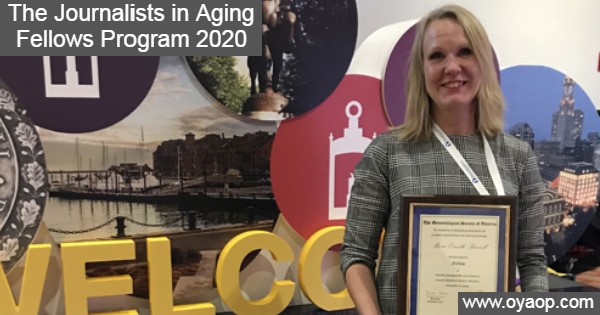 The Journalists in Aging Fellows Program 2020

Applications call for the Journalists in Aging Fellows Program 2020.

The Gerontological Society of America (GSA) and the Journalists Network on Generations are welcoming applications — from journalists who represent mainstream or ethnic/community news outlets in the U.S. and who are covering/wish to cover issues in aging — for the 11th year of the Journalists in Aging Fellows Program.

The Journalists in Aging Fellows Program will be conducted entirely online. Support is provided by grants from The Silver Century Foundation, RRF Foundation for Aging, The John A. Hartford Foundation, and the Gannett Foundation. Stories resulting from the last ten years are available on GSA’s website.

Basically, this program’s goals are to educate journalists about issues in aging, better allowing them to spread a new awareness to general audiences and ethnic or targeted communities (such as LGBTQ, disability, or gender-focused groups); and to disseminate accurate information about new scientific findings, policy debates, innovations, and evidence-based solutions.

Additionally, GSA has structured this program to build three bridges: to connect working reporters with experts in the field; to link journalists new to the complex issues of aging with experienced age-beat reporters; also ultimately to channel reporters’ enhanced knowledge — fortified by current research — to their communities, in their own languages.

Moreover, each fellows undertaking the Journalists in Aging Fellows Program will receive a stipend of $1,500, with $500 to be paid at the conclusion of the program’s initial educational sessions and the remaining $1,000 upon publication/airing of the long-term project.

Candidates of the Journalists in Aging Fellows Program will be required to participate in a short series of exclusive background and issue-focused educational sessions scheduled the weeks immediately before and after the November 3 presidential election (October 28 and 29 and November 11 and 12). They will then have full access to GSA Annual Scientific Meeting sessions of their choosing (November 4 to 7, and available for later on-demand viewing). Fellows will also commit to completing one short-term story about any research-based aspect of aging; and a long-term in-depth project of their own design. The latter must be summarized in a one-to-two page story pitch.

All articles must be published, broadcast, or posted through distributed or circulated news media entities rather than personal blogs; and will be required to include a note at the beginning or end crediting that it was written/produced with support from the fellowship. (Reporters will be provided text samples that may be adapted for different media.) The stories must reach an audience within the U.S.