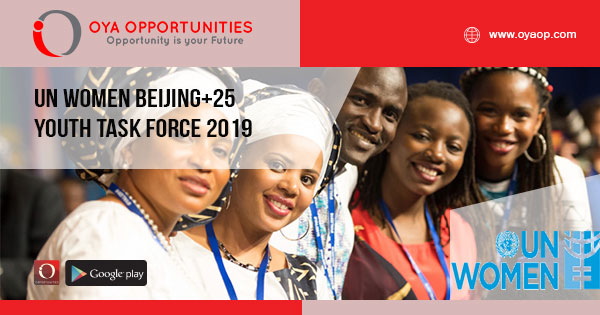 Scholarships and Fellowships
Country: China
City: Beijing
Save
Looks like you haven't logged in. Login to save opportunities.

Moreover, As we take stock of progress made in advancing women’s rights and gender equality.  UN Women is to ensure that young people are at the center of this process. Further, focusing on the 25-year review and appraisal of the adoption of the Beijing Declaration and Platform for Action.

It is within this context that UN Women is announcing a call for applications for the composition of a time-limited Youth Taskforce that will work closely with UN Women from August 2019 to September 2020. Additional,  to ensure the meaningful involvement of young people in the global processes of the 25th review. Also, appraisal of the BPfA. The work of the Youth Task Force will be into four thematic committees (see the Terms of Reference). Applicants to the Task Force will be invited to indicate a preference for membership of a thematic committee.