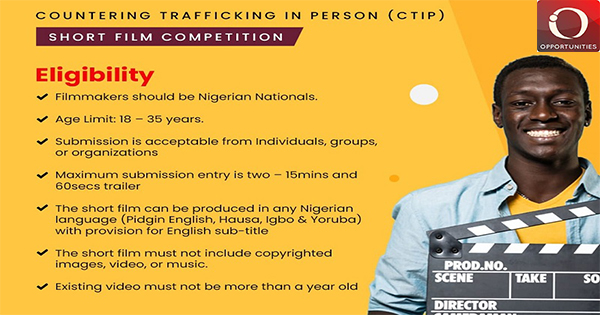 Competitions and Awards
Fully Funded
Country: Africa
Save
Looks like you haven't logged in. Login to save opportunities.

Entries are invited for the LEAP Africa Counter Trafficking in Person (CTIP) Short Film Competition 2022. The CTIP themed short film competition is established to leverage the power of media to inspire and motivate people, move past walls of deep-seated values and beliefs, tap into human emotions- hearts and minds, open pathways for deep and authentic conversations and impact cultural roots.

Human trafficking continues to be a persistent problem in Nigeria in spite of efforts by national, international, and multinational organizations. Although the dangers and the legal consequences of human trafficking are publicized, the problem lingers. According to the 2012 TIP Report, Nigeria serves as a major source, transit, and destination country for women, men, and children subjected to forced labour and sex trafficking. It is noteworthy that during the height of the COVID-19 pandemic and lockdown from March to April 2020, unsafe migration continued from Nigeria.

Historically, the majority of Nigeria’s trafficking victims come from its South-South regions – Delta, Akwa-Ibom, Cross Rivers with the highest numbers from Edo State. Also, an increasing number of victims are recently reported to originate from Northern states especially in the North-Eastern parts of Adamawa, Borno & Yobe.

The power and relevancy of film documentaries for advocacy purposes in the modern world cannot be overemphasized. A film documentary can be used to change or improve society in some way by bringing to light certain causes or injustices – violent practices and abuses – with the hope to help galvanize the communities to change certain attitudes and perceptions.  It can also be used to encourage dialogue across different groups of people.