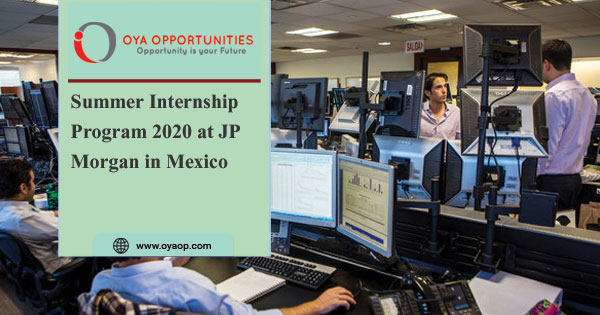 Internships
Country: Mexico
City: Mexico City
Save
Looks like you haven't logged in. Login to save opportunities.

JP Morgan calls application for Global Financial Crimes Compliance Summer Internship in Mexico City, Mexico. Global Financial Crimes Compliance is responsible for the Anti-Money Laundering and Financing of Terrorism program according to Mexican regulation and firm-wide standards, providing coverage in such area to the different lines of business with a presence in Mexico. The department has an active role as control and advisory area, as well as in the interaction with authorities in connection to AML / FT related matters.

JPMorgan Chase & Co. is an American multinational investment bank and financial services holding company headquartered in New York City. JPMorgan Chase is ranked by S&P Global as the largest bank in the United States and the sixth-largest bank in the world by total assets, with total assets of US$2.687 trillion. It is also the world’s most valuable bank by market capitalization.