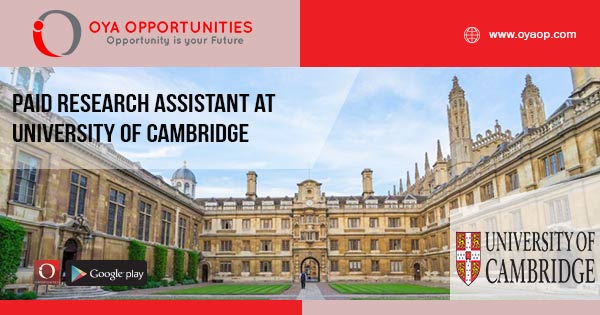 Paid Internship at University of Cambridge

Internships
Paid
Country: UK
City: Cambridge
Save
Looks like you haven't logged in. Login to save opportunities.

The University of Cambridge is seeking to recruit an ambitious paid internship to join the Marciniak lab to investigate the role of membrane trafficking in the pathogenesis of pulmonary fibrosis. As part of a research programme led by Dr. Jennifer Dickens, will use a wide range of molecular, cell biological and biochemical techniques to discover novel disease mechanisms. Founded in 1209 and granted a Royal Charter Cambridge is the second-oldest university in the English-speaking world. Also,  the world’s fourth-oldest surviving university.

Moreover, Cambridge is formed from a variety of institutions which include 31 constituent Colleges. Along with, over 100 academic departments organized into six schools. Further, Cambridge University Press, a department of the university, is the world’s oldest publishing house and the second-largest university press in the world. The university also operates eight cultural and scientific museums, including the Fitzwilliam Museum, as well as a botanic garden.

Additionally, The purpose of a paid research assistant is to support and maintain the University national and international reputation for excellence in teaching and research. Further, Contribution to excellence in research will be as a member of a research team carrying out research under the direction of a principal investigator to include data collection, analysis, and some interpretation. Contribution to publications may be encouraged. The role holder will participate in the overall contribution of the department and Institute, as appropriate.

The internship candidate will be focussing on areas listed below;

NOTE: The University has a responsibility to ensure that all employees are eligible to live and work in the UK.