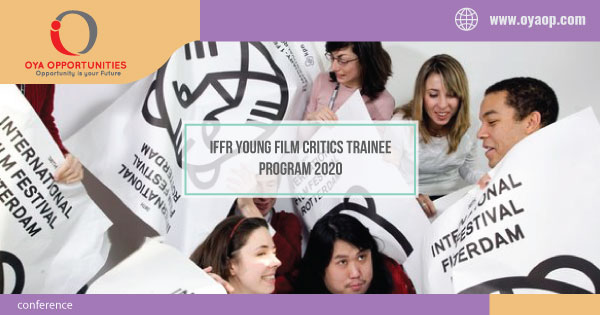 Conferences, Internships
Fully Funded
Country: Netherlands
City: Rotterdam
Save
Looks like you haven't logged in. Login to save opportunities.

IFFR recognizes the vital importance of film analysis and criticism. Hence, in 1998, it launched the Young Film Critics trainee program to support young and upcoming film critics. IFFR invites a group of young and motivated professional film critics from outside the Netherlands to come to Rotterdam to cover the 2020 festival. It provides them with the means to sharpen their journalistic practice and explore the wide landscape of independent cinema on offer at IFFR, one of the major international film festivals for the press, industry members and audiences.

The program provides a unique insight into a broad range of programmes on offer at the festival, ranging from films by well-known arthouse auteurs to more experimental and obscure cinematic gems and from art installations and performances to talks and film industry conferences.

As a trainee, you are part of the editorial team of the festival. You will have meetings with experienced film critics from different backgrounds, cover the festival for your own journalistic affiliation and be part of IFFR’s editorial staff. Of course, you will also get to experience the full joy of being at the International Film Festival Rotterdam. With the changing media landscape in mind, this year’s program will put special focus on candidates with mixed talents. Besides excellent writing skills, the trainee will gain experience in audiovisual, audio or other innovative modes of journalism.

The IFFR trainee successful to participate in the Young Film Critics program will receive fully funded opportunities including:

Candidates are eligible to participate the Young Film Critics Traineeship if they meet the IFFR’s requirements which include:

How to apply for the 2020 Young Film Critics Trainee Program?

Applicants can submit their application via email to the International Film Festival Rotterdam. Along with the application, the applicants will require to attach the following documents (as one PDF):

IFFR accepts the application for the 2020 Young Film Critics Trainee Program until 1 October 2019. Applications arriving after the deadline are invalid.